Translink’s North-West Multimodal Transport Hub in Derry-Londonderry has picked up two more prestigious awards in recognition of its heritage and sustainability led design and build.

Farrans was the principal contractor for the delivery of the hub with integrated rail, bus and active travel facilities at the Derry/Londonderry station.

The REGIOSTARS Awards are a yearly competition, organised by the European Commission’s Directorate General for Regional and Urban Policy. It aims at identifying good practices in regional development and highlighting innovative, EU-funded projects, which could be attractive and inspiring to other regions and project managers. 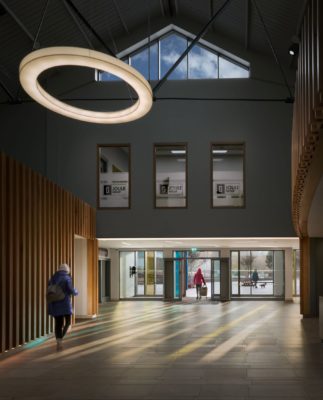 The project also won Best Overall Entry at the National Rail Heritage Awards, which celebrates the implementation of best practice, high standards, careful design and quality of workmanship in the restoration and maintenance of buildings, structures and signalling installations.

Located in Derry/Londonderry, Northern Ireland, the new North-West Multimodal Transport Hub promotes a shift away from car use by integrating local and cross-border public transport with the railway network. It provides a seamless service that allows users to switch between transport modes easily and strengthens links between urban and rural areas. The hub improves connections with existing networks for walking or cycling and the cross border greenway network, and delivers a range of active travel initiatives.

Works included the refurbishment of the original Grade B listed building, the construction of the waterside train station building to include an active travel centre, the creation of a new Park and Ride Facility and bus turning circle, a Greenway link to the city centre and the demolition of the existing railway station. Works were carried out in 2 phases with completion of phase 1 in October 2019 working in Joint Venture partnership with railway engineers, Rhomberg Sersa.