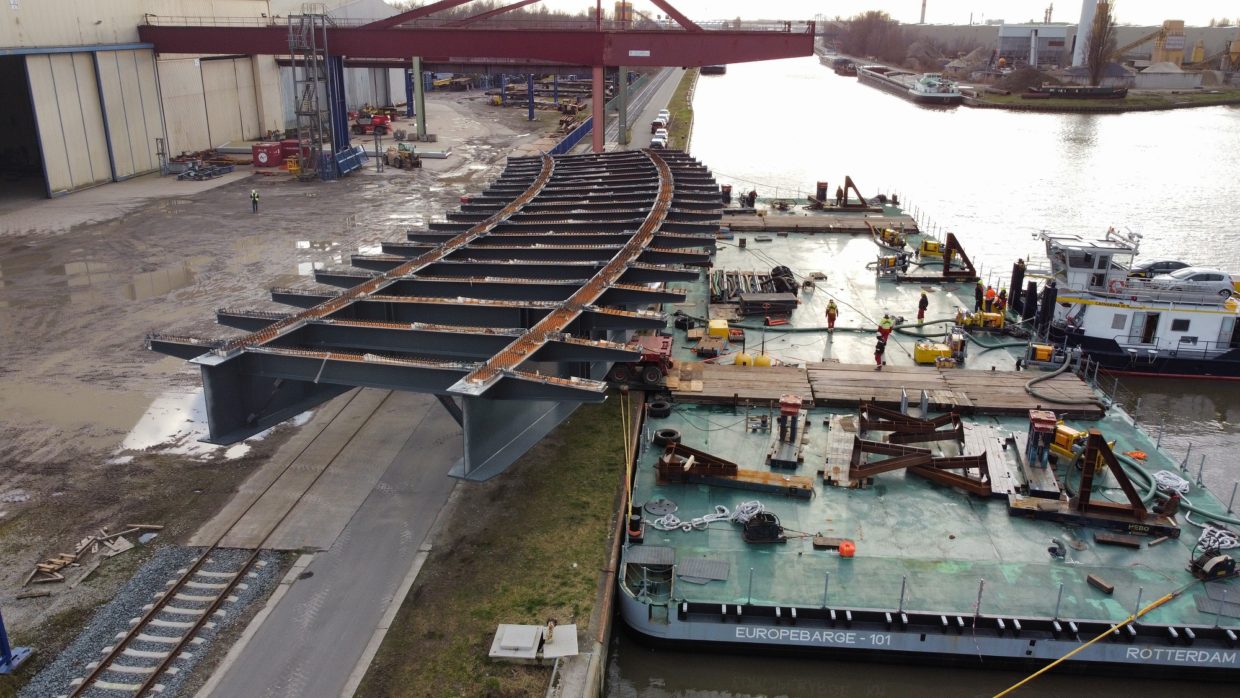 The first major steel section of the Gull Wing bridge in Lowestoft has arrived.

The North Approach Viaduct (NAV1) section arrived at the construction site on Lake Lothing on Tuesday March 1 on a barge following a 32-hour crossing from Ghent in Belgium.

Farrans is constructing the bridge for Suffolk County Council.

On delivery it weighed 380 tonnes and, when ready to move into its final position spanning the East Suffolk railway line, it will weigh approximately 1,450 tonnes.

The complex process of navigating the barge into the inner harbour and then transferring the steel structure from the barge on to the site was overseen by a team of experienced civil engineers, port masters and marine experts.

In the coming days it will be moved to a special platform where a concrete slab deck will be cast in situ before the entire span is moved and placed in its final position during a weekend long railway possession.

NAV 1’s arrival was dependent on weather conditions remaining favourable and it needed to arrive during a slack tide to travel into the inner harbour.

Neil Rogers, project director on Gull Wing bridge for Farrans, said: “The arrival of NAV 1 is an important milestone for the progress of the Gull Wing project and also for our team, who have been working hard to prepare for the technical challenges involved in receiving and moving such a large section of the bridge.

“Victor Buyck began manufacturing this structure back in July 2021 and we are pleased to now have this integral piece on site, following meticulous organisation in both Belgium and in Lowestoft.

“More large sections will be arriving during the coming months and the local community will be able to see the bridge coming together above the water line. Work has been progressing well and there have been significant changes to the landscape of the site throughout the last year.”

Councillor Matthew Hicks, Leader of Suffolk County Council, said: “I am delighted to welcome the arrival of the first section of a bridge that will make a huge difference to people and businesses in Lowestoft for many years to come.

“It will remove a major impediment to growth by reducing congestion and improving connectivity, something that is central to the regeneration of not just Lowestoft but the wider Suffolk and Norfolk region.”

Peter Aldous, MP for Waveney, said: “This is an exciting development as people can now begin seeing for themselves the bridge taking shape. Once complete it will transform the way we move around and do business in Lowestoft and will be a landmark of which we can all be proud.”