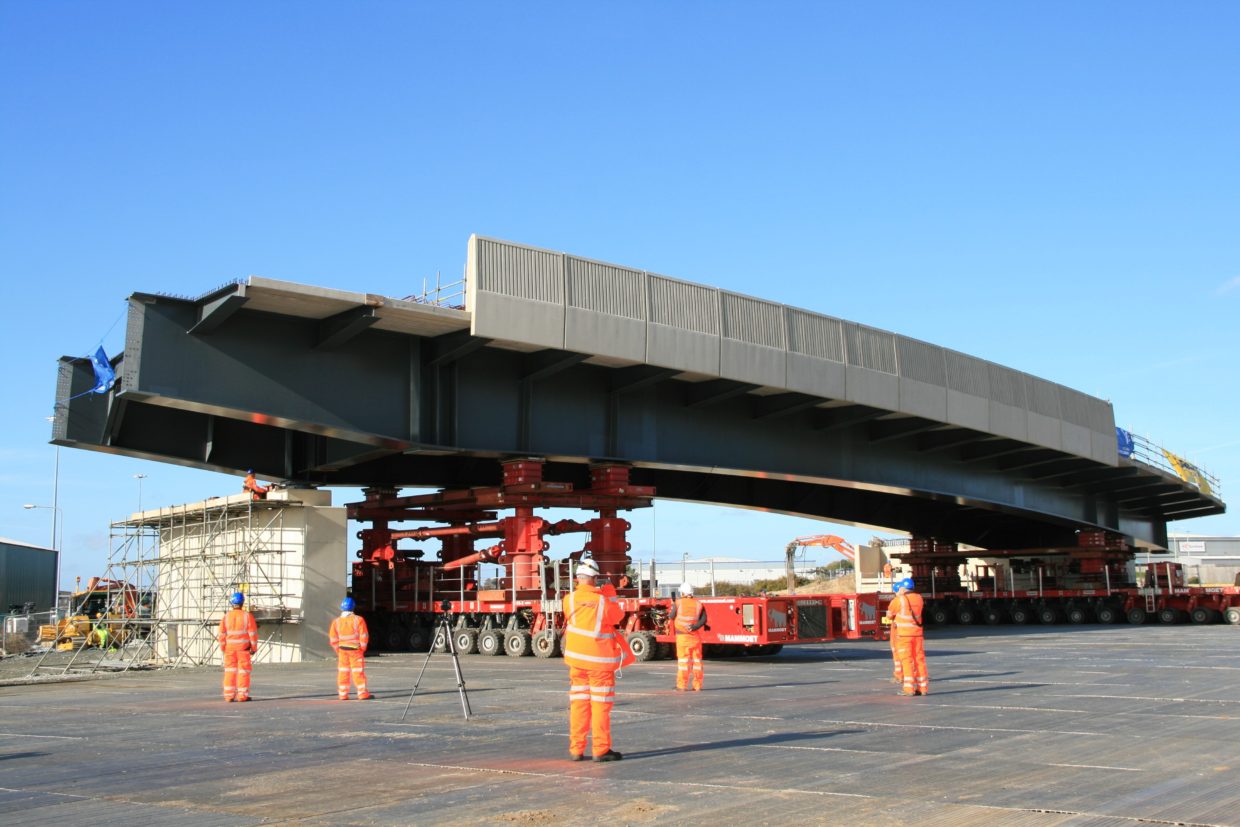 The first major steel section of the Gull Wing bridge in Lowestoft has been moved into its final position over the East Suffolk railway line following a successful weekend-long track possession and a complex engineering operation.

Farrans is constructing the bridge for Suffolk County Council.

The North Approach Viaduct (NAV1) section arrived at the construction site on Lake Lothing on Tuesday March 1 on a barge following a 32-hour crossing from Victor Buyck Steel Construction in Ghent in Belgium.

It weighed 380 tonnes on delivery. Since then, the bridge has had a reinforced concrete deck and parapets added to it and in its move to its final position it weighed close to 1,450 tonnes.

The operation began at midnight on Friday evening and concluded on Monday at 5am when the line was returned to Network Rail.

NAV1 was moved using self-propelled modular transporters (SPMTs), multi-axle hydraulic units which can be added together depending on the length of the load.

Sixteen individual axles in two rows of two maneuvered the section into its final position.

“We have had approximately 120 operatives on site working in shifts over the 52-hour railway possession to ensure the successful installation of NAV1.

“As soon as this section of steel arrived on site in March we have been busy constructing the reinforced concrete deck, installing the parapets and getting the abutment and pier support structures ready. Over recent weeks we have been preparing the track protection measure necessary to allow trafficking the rail lines with the extremely heavy load.

“Although planning and implementing this challenging element of the scheme has been the focus of our attention recently we have also been progressing the work associated with the other seven spans which cross Lake Lothing, including the main bascule lifting section of the bridge which will be installed next year.”

Councillor Matthew Hicks, Leader of Suffolk County Council, said: “This is a significant and exciting milestone in the building of the Gull Wing bridge.

“People can now start seeing the bridge really begin to take shape, a structure which once finished will have a huge and positive impact on the town of Lowestoft and the wider area.

“It will open up investment into the town by tackling congestion and improving connectivity for motorists, cyclists and pedestrians.”

Peter Aldous, MP for Waveney, said: “It’s good news that progress continues to be made on the construction of the Gull Wing Bridge, which once completed will change our skyline forever; making it easier to travel between north and south Lowestoft, reducing traffic congestion in the town, and attracting new investment to the area.

“It is essential to ensure that the bridge, which has been such a long time coming, delivers a lasting legacy of increased business activity and skilled jobs for local people, and I will be doing everything I can to ensure that this happens.”